Lol, no he doesn't but I do it anyway. Cannot help myself loving on a big fat cat!

Repping my sister in laws cat because she is adorable. Her name is Minny, short for Minerva.
(Sorry, I was a little "medicated" when I took this.)

I've raised my dog since she was 8 weeks old and she will be 7 on May 1st. She's my mascot! Lol

My boy Archer. He’s the best little buddy a girl could ask for. Here he is with his ribbon he earned last weekend for his first ever Coursing Ability Test. He ran two and only needs one more for his title.

This is Astrid. Rebecca and I adopted her and she is very affectionate.

He is such a photogenic lil fluff

Here she is my girlfriend as my wire calls her , Mona Bella the boarder beagle 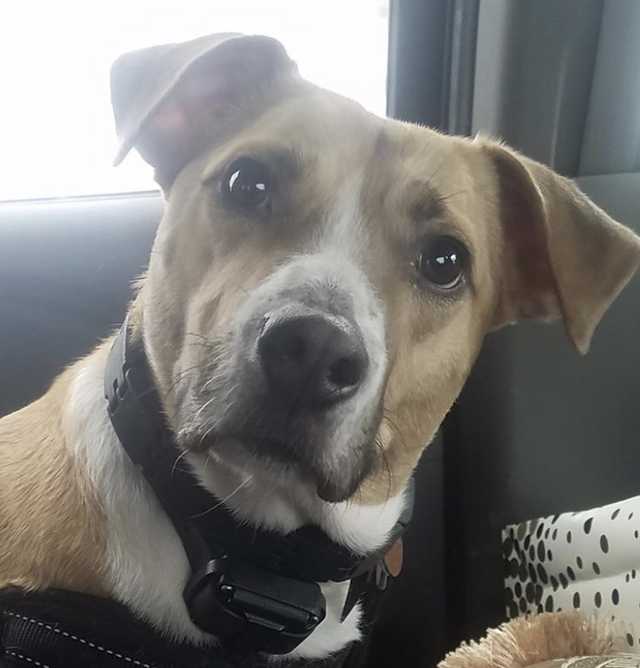 Miss Ella curled up next to my knee.

No pets right now due to my current landlord's policy. I love cats though.

HUGEisElegant said:
No pets right now due to my current landlord's policy. I love cats though.
Click to expand...

I moved to another country for a while because of my job and left my cat Bubs to my mom. But I'll definitely take her again when I'm back. Though I'm not allowed to have pets at my new place I suspect some of my neighbours does despite the restriction. Because I saw fleas in my apartment! Or it was looking similar to that. I'm currently reading this page and planning to spread diatomaceous earth everywhere. Am I doing right?

RockyAO said:
I moved to another country for a while because of my job and left my cat Bubs to my mom. But I'll definitely take her again when I'm back. Though I'm not allowed to have pets at my new place I suspect some of my neighbours does despite the restriction. Because I saw fleas in my apartment! Or it was looking similar to that. I'm currently reading this page and planning to spread diatomaceous earth everywhere. Am I doing right?
Click to expand...

Too bad about the fleas! Even though you'll find several sites that recommend using diatomaceous earth in the home, I would NEVER use it inside. Diatomaceous earth is essentially a crushed porous rock that is comprised of small fossilized aquatic organisms from millions of years ago. While the material itself is completely non-toxic and benign, the very structure of it is like micro knives and needles once it is ground very finely. This is why diatomaceous works as a passive pest deterrent, because as an insect walks through it, the diatomaceous earth sticks to them and essentially stabs them to death. In addition to this, the porosity of it also absorbs fats, oils and water from whatever it sticks into and dehydrates it. Again, the material itself is benign and non-poisonous, but it's the actual micro structure of it that makes it effective.

However, it's astounding to me how many sites blindly recommend using diatomaceous earth indoors without taking into account what makes it so inappropriate for indoor use. I'd never use it indoors for two reasons: the first being that if it becomes airborne, it can get into your lungs and cause breathing issues. Just look at the warning label on any bottle/packet of diatomaceous earth to see how it warns to not breathe the particles in. In most cases it instructs you to wear a respirator when applying it! It's actually hazardous when breathed in because of the micro structure and dehydrating qualities of it.

The second issue - and the one most pertinent to the issue at hand - is the fact that diatomaceous earth can affect pets as well. Not only can it affect their breathing for the same reasons, but if they come in contact with it, it can irritate their paws and can even become painful for them. In fact, these issues can be even worse for pets because they are on the floor where diatomaceous earth is typically applied - exactly where their paws and noses are either in direct contact with it, or are literally within inches of it. They can also eat it, which can cause digestive issues as well. I'd never use diatomaceous earth indoors for these reasons.

Here's a visual warning of how this stuff is not to be casually messed around with. I came across this during a quick search for applying diatomaceous earth on a carpet. Just look at what they suggest to wear while applying it!...

This stuff is hazardous to breathe in, it can irritate your eyes and skin and should NOT be in your home where it can become airborne, and where it's negative health affects can progress over time. I'd hate for your kitty to develop health issues because you used it indoors.

Have there been no pet photos since JANUARY of last year?

Let's fix that!
This is Pugsley. She's a year old!

Andromeda is currently suffering from a bad bladder infection, but is being an incredibly good sport about it all.

In general she is the most affectionate and even tempered cat you could hope to meet, not to mention having the softest fur. In the past year+ of my working from home she has spent a good part of each day with me (sleeping in the chair next to my desk) and only insisting on invading my desk for a heavy scritching session once or twice a day.

Unfortunately her health issues are piling up; she is fourteen so I suppose that isn't a surprise. She's on regular pain killers for a degenerating leg joint, on a puffer for asthma, and this is her second bladder infection this year. But none of this has spoiled her enjoyment of laps, affection, sun-beams, or food (she is, uh, a little food motivated).

@Tad Healthy wishes to your kitty

This is Buffy. I love her. She has had some health issues too, so was in the house for a bit (and making herself at home on the table

). I love chickens so much!

I have some other chickens and water fowl I will share later.

Me trying to get some writing down, sit on the floor and write on the couch