BHM The Shocking Adventures of Spark

(Mostly kidding. This is your story, do with it as you will. I'll be waiting hungrily for a sequel!)

((A/N: You know there's always a post-credits scene with me.))


On paper, I'm just your regular, mediocre American woman, fighting through the day-to-day ennui of my boring 9-to-5 to keep the lights on in my crummy, slummy apartment. I like watching the Summer Olympics with a hard seltzer in hand, but if it's not a leap year, I'll settle for soaps. I also like the opera, but I can't afford to go.


A former acting coach once told me I was 'pretty, just not in a silver screen kind of way, and as for the runway--let's just say you've got some work to do', which is fair. I've never been smaller than an 8, and not the stylized, hourglassy kind you see on 'plus-sized' clothing adverts squeezed into two tons of shapewear.


So I gave up. Another failed actress. This year will mark the two-year anniversary of my graduation from community college with a BA in communications and a 3.2 GPA. I've had several one-night stands and one meaningful relationship, if it can be called that--it lasted three days. I ended it. He took it hard, but he's doing better now according to his social media.


I probably sound like your next-cubicle coworker or your spinster neighbor or your aunt who drinks too much vodka: tragic, but in a polite, dismissable way.


But I find that if you really want to examine someone, you need to take a good, hard look at where they're from.


And there's nothing polite or dismissable about Blackwater City.


If you've ever met anyone from here, they probably couldn't give you a straight answer to the question, is it nice?


Sure, it's nice, depending on your definition of 'nice', and how long you've been driving down the I-39 en route to somewhere better.


If you asked me to draw you a map, I think I'd draw you two and layer them one on top of the other. On the surface, you have your pockets of affluence: manicured suburbs and spotlessly-shined strip malls sprinkled sparsely towards the outskirts of town, but growing denser, larger, and higher into airspace the closer you draw towards East Downtown, a veritable clusterfuck of narrow one-ways and tinted-glass high-rises competing for sunlight like it's a finite resource. The fat cats here, along with their pet office-clowns and interns, live in comfortable repose, and why wouldn't they? The streets are swarming with cops. But the crime here is invisible: corporate fraud through shell companies, OSHA violations, tax evasion, you name it. You could go your whole life downtown without being mugged, but for all you know, your boss could be robbing you blind.


And if you do know, then it probably pissed you off when Big Tech announced he was going legit.


Just under the city's vulgar veneer of industry, its landscape is dotted through with enclaves of destitution, emanating on the map like a starburst from the swath of Westside slum where the river runs parallel to St. Philip Parkway. Out on the Westside, the drab earth tones of windblown dirt and dust coat the surfaces of every rickety old apartment complex, grimy gas station, fast fashion 'boutique', plywood 'Psychic Readings Here' sign, and ancient, foreign mom-and-pop hole-in-the-wall cafe.


Out on the Westside, you keep your earbuds in, your head down, your mouth shut, and you mind your own business, and you don't walk by the methadone clinic up the street from the Pryor Cosmetic Hospital.


Out on the Westside, trouble waits around every corner, but so does hospitality. If you're out alone at night, or closing up a shop by yourself, you're liable to get stuck up for your wallet, and if you're empty-handed, your assailant might just get pissed at you for wasting their time. This is how many a Westsider has met one of a handful of local superheroes--Bombshell, Evergreen, Spark...and I guess I have made four saves in the month that I've been doing this.


This is also how plenty of folks have met God.


The people in the slums are by far friendlier than the ones in the high-rises. In the most run-down of neighborhoods, you're never at a shortage for someone to pull up and offer you a ride in the rain, or invite you in for a home-cooked dinner. But when you live on a block where anxiety is your default setting, are you really gonna chance it?


What makes it sting more than anything else is knowing you're just one bounced paycheck or late rent payment away from resorting to the same gun-slinging acts of desperation as the people you keep your guard up against.


If you live in the city, you've probably mentioned me in passing lately. Not by name, and probably not even by my supersona. You've just been calling me 'whoever called the Bombshell hotline on Big Tech'. Love or hate that guy, you've gotta admit, he's a trailblazer, and I don't mean because he's the fattest superhero in America.


Everyone has their own version of the story of the battle that demolished the courtyard of the Westpark Hotel last year. Here's mine: in the summer of 2023, an average Oregon man made an unprecedented ascent into the mind-boggling world of super-heroics-and-villainy without any powers to speak of, unless we're counting grit, ambition, and some very sophisticated weapons. Where so many others have crashed and burned, he finally succeeded.


I'm just a girl who got tired of living my life looking over both shoulders, wondering if I'll be in incontinence briefs before I'm 40 on the chance I get attacked on the street and piss myself out of fear, and wondering, in the event that someone does jump out from around a corner to get me, if I'll have time to dial the FatPhone before the light leaves my eyes.


I'm just a girl who's slept around my office, and, by a stroke of luck, fell into bed once with a coworker who knew how to make his own tranq darts and smoke grenades and was all too happy to teach little ol' me.


Right now, Steve Pryor, the CEO of Pryor Pharmaceuticals Weight Loss Solutions, is probably pacing the floor of his 44th-story corporate headquarters, nervously trying to explain to some scientist from the government how he managed to lose tens of thousands of dollars' worth of drugs and research when Spark and an unknown accomplice raided his cosmetic hospital. As for me...I'm currently in the middle of robbing the cosmetic hospital.


Before you ask why they didn't tighten security after the first robbery, they did. I just know how to get in because, well...this is my day job. I work as a receptionist at this lipo clinic. I'd probably find a better haul if I just robbed HQ, but I didn't want to run the risk of running into Steve.


Then again, would he have recognized me in a gas mask and hazard-yellow skintight catsuit?


In any case, there's enough sedatives and narcotics left in this dump to get me through a week of tranquilizing backalley muggers and stopping gas station gunpoint robberies.


You might never learn who I am, and for your sake, I hope you never need to call for me. But if you just want a name to put to the color scheme, the press has given me one I like enough to keep:

A/n: Thank you so much to everyone who's stuck with me and seen Ben through to the--well, obviously this isn't the end.


This…has definitely been a departure from my previous works. With the level of deliberation I put into, say, Served, a few of you might be thinking the disorienting ambiance of this piece has been deliberate.


That's not what happened here.


2021 was, for me, probably the worst year of my life, due to some of the truly heinous jerks that came into my life. (None of you. Y'all are good.) It was a terrifying time for me, so, naturally, I produced something confusing, disorienting, and terrifying.


But what WAS deliberate was my omission of a 'final showdown' scene between Ben and co and the agents of the US Heroics Division stationed at Rivington.


Partially, I did it because Spark Episode 1 was always intended as Ben's hero origin story, and once he blows up a school, he'll be...something else. Something it's hard to come back from. Big Tech had it easy; he was never so far gone as to deny himself a chance at a heel-face turn.


But also, there are some parts of this series--like the ex-Marine police captain's backstory--that I want to leave the reader with a looming sense of dread about. There are some events in the Sparkverse I want you to think are so horrible, not even the narrator is willing to tell you about them.


There's more of this series coming, and feel free to message me if you want to know where to find some steamy bonus content!


Don't worry. Commune of Crucifix is coming, and this one's gonna be a war story.


Same fat-time, same fat-channel. Don't touch that dial. (I'll leave it up to your interpretation whether that's a promise or a threat

...OK, is it weird that I'm kind of totally into Catalyst, despite her getting the least amount of "screentime"? Maybe it's how gripping that prose description was or maybe it's because of the criminal lack of fat characters who are also full-face-masked cryptid weirdo types like the Scarecrow.

(Question though: it's probably my neurodivergent brain failing to keep track, but is Catalyst someone we met previously in this story?)

JimBob said:
...OK, is it weird that I'm kind of totally into Catalyst, despite her getting the least amount of "screentime"? Maybe it's how gripping that prose description was or maybe it's because of the criminal lack of fat characters who are also full-face-masked cryptid weirdo types like the Scarecrow.

(Question though: it's probably my neurodivergent brain failing to keep track, but is Catalyst someone we met previously in this story?)
Click to expand...

YAY I'm glad you like her! And I agree--thick chicks in sexy-fied Hazmat gear throwing smoke grenades full of drugs are cool af, which is why I made her.

Also, ding dong you are RIGHT! She's Big Tech's ex, Tegan, AKA the girl who drove him to become Big Tech in the first place, so her name is a bit of a double entendre. She's called Catalyst because she uses chemical weapons, but she's also unwittingly the "catalyst" of all the events in this series thus far. 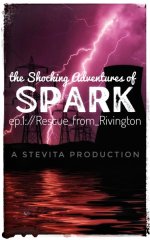 Just thought I'd drop the cover art for this.
You must log in or register to reply here.