What exactly counts as a stuffing?

Is it a certain volume of food? Is it a specific number of calories? Does it have to be done with sexual intent? What makes “stuffing” different from just “eating?”

In a word - gluttony
E

to me it is just about feeling... feeling that you just cannot take another bite with danger of throwing up, or just knowing that you are at the limit of it. and that implies that you ate way beyond being just not hungry, full, very full, and then some more, when a lady admits to that, it is very very sexy

A fetish involving people being fed so much to get a bloated stomach."

In that case I unintentionally did that tonight. TL;DR Stuffing is eating to discomfort.

I had a long shift at work and an early break. Stupidity I hadn’t eaten anything before work so I grabbed an eclair. About an hour later I found out I was supposed to be on break. So I had a large dinner thinking “ok I’m not going to be able to eat again for like 7-8 hours, I better load up.” Now after being quite full and finished with my break I find out we’re having a surprise birthday party for our boss and I was give a huge piece of cake and expected to finish it to not insult our boss, and his wife who is the head baker and spent all morning making a extra large cake to feed our entire store staff.

Moral of the story, stuffing is just eating to the point of near vomiting Roman style.
.
.
.
An the Universe and Karma are feeders apparently. I get the universe hating me but what did I do to piss off karma?

It probably varies by individual.

For me stuffing still has the classic sense of eating (or drinking) so much that it makes your belly temporarily bigger and getting some sort of sexual arousal from it, despite any discomfort, such as pain or nausea, that you may also be feeling.

With fat people, it tends not to work very well, as it doesn't produce a noticeably bigger belly. This is why I used to stuff quite frequently, when I was younger, but I don't do it anymore now that I'm fat.

I don't count the hearty eating that gainers usually engage in on a regular basis as stuffing, because it's for weight gain rather rather than an instant and temporary increase in belly size.
E

I would say the definition is different for everyone...but mostly, it has to be whatever is most fulfilling for you!!

I mostly prefer what I call "lazing and grazing" a majority of the time. But I do have my days (like this past week or two) where it's fun to see just how MUCH you can really handle. Times like these, I go with a mix of my favorite foods ...and just roll with it!

I have always had a big appetite and its so thrilling for me to put it to a real test!!

My latest accomplishment? A dozen donuts (among other ridiculously fattening meals) in two days!!

DWilliams1 said:
I would say the definition is different for everyone...but mostly, it has to be whatever is most fulfilling for you!!
Click to expand...

I totally agree with that.

Now I am feeling discomfort when I am not stuffed, so I have to eat snacks between meals pretty much all the time. I have also the strange sensation of my belly being stretched while feeling hungry at the same time.

I took a break from overstuffing during the last three weeks or so to see whether I maintain my weight - I did, my belly actually grew about 1/2" during this time. I plan to resume overstuffing next week and gradually increase the amount of cream and milk ingested. 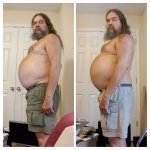