Plus sized centric episodes or story elements in television or films.

She looks to have a nice full pair or breast. Good find!

JDavis said:
The Good Wife has some large women in the last season. Margot Martindale plays a non-comedic role as a campaign manager .
There is also an episode in the last season with a SSBBW getting deposed but I couldn't find it on Wikipedia. It seems to me Julie Margulis was getting sensitive to sizism the last season which lead her to do Dietland.
View attachment 131361
Click to expand...

Does anybody remember the plus size beauty pageant that was on the Oxygen chabbch in either 2005 or 2006? It was called "Mo'nique's F.A.T. Chance". It was basically Miss. America, but directed solely to finding and representing SS/BBW women. They only did one and then it was never done again. Kind of a shame, really.

Location
In a salt fog

The Sopranos features a ton of fat men, and food and eating are woven through the whole show.

There was a UK show called Fat Friends, about a group of people who meet at a slimming club, become friends and improve their lives without weight loss. There is a lot of dieting and negative views on fat but the characters are treated as fully human and they push back against these views too.

The Full Monty has a plot line about a fat guy getting his groove back.

There’s a movie called A Matter of Size which is about a bunch of fat Israelis who start learning to do sumo wrestling.

Actually, sumo wrestling in general. You can watch bouts on YouTube. Poetry in motion.


She looks to have a nice full pair or breast. Good find!
Click to expand...

Colonial Warrior said:
I loved that show!!! I must confess I had a crush with the late Susan Peretz!!!
Click to expand...

She also guest-starred on an episode of "Barney Miller" as a housewife arrested for throwing a coffee mug at her husband because he wouldn't stop comparing her to his skinny ex-wife, and made her buy jeans so tight she can barely stagger into the precinct.
Last edited: Jan 11, 2019
S

You can link to the actress and or the IMDB?
M

Plum - main character
Love this show! Is it coming back???? Thanks!

Here's a few movies that haven't been mentioned:

Zuckerbaby (1985). A German film directed by Percy Adlon, starring Marianne Sagebrecht as a fat, lonely mortician who develops a crush on a married subway conductor she sees while going to work, and pursues him relentlessly. Its something of an art film, and does not have a happy ending, but Sagebrecht is very good in it. It was remade for network TV, premiering on CBS on Valentine's Day, 1989, as Baby Cakes. This starred Rikki Lake and Craig Sheffer as the smitten mortician and the object of her affection. It is a more conventionally mainstream film, and this one does have a happy ending, which works well and leaves viewers with a smile on their faces. Lake is delightful.

As she was in a movie I can't believe nobody has yet mentioned, Hairspray (1988), John Waters's quirky PG rated comedy, which also starred his muse, Divine. They played, respectively, spunky fat heroine Tracy Turnblad and her mom, Edna. The first film I can think of that had a fat girl as the lead character - and she gets the guy! This was, of course, turned into a Broadway musical in 2002, staring newcomer Marissa Jaret Winotur and Harvey Firestone as Tracy and Edna. This was a huge success, and begat a film version of it's own in 2007, with another newcomer, Nikki Blonsky. I can't comment on this version. I refused to see it, since casting a thinner actor in a fat suit (John Travolta) as Edna Turnblad (in a movie at least in part about size acceptance, and large size empowerment) seems to me equivalent to casting a Caucasian in blackface in one of the African-American roles. Finally, NBC aired a live broadcast of the musical with a new cast in 2016. As with the other versions, a fresh face made her debut as Tracy Turnblad, Maddie Baillo.

Another made for television film, this time broadcast on the Lifetime network, was Queen Sized, (2008), starring Nikki Blonsky, from the 2007 version of Hairspray. This is a high school-set dramady about a fat girl who is nominated for homecoming queen as a cruel joke, but goes on to win.

Finally, there is the independent 2002 film Real Women Have Curves, starring American Ferrera. Based on the acclaimed play written by Josefina Lopez, and directed by a woman, Patricia Cardoso, it recounts the struggles of a family of Latina women in East L.A., fighting against racism, sizeism, and constricting expectations. None of the women are super size, particularly Ferrera, but it is an engaging film detailing the lives of characters who are seldom granted the spotlight in movies. It also stars George Lopez, in a supporting role as a mentor/teacher.

As far as the movies that have already been mentioned. . .I fucking hate Shallow Hal and especially Feed (and I'm a horror movie aficionado!). On the other hand, I love City Island. As far as I know, its the first mainstream film to include feederism in it's story (even if it is a subplot). Not only that, they don't treat it in an exploitative or distorted way. Who woulda thunk?

DragonFly said:
Dawn French in the Vicar of Dibly - big big girl crush on her
Click to expand...

Love her too.
A

ravfa said:
Here's a few movies that haven't been mentioned:

Zuckerbaby (1985). A German film directed by Percy Adlon, starring Marianne Sagebrecht as a fat, lonely mortician who develops a crush on a married subway conductor she sees while going to work, and pursues him relentlessly.

If we're talking Marianne Sägebrecht, a beautiful film with her is the French-Czech "Martha et moi" (1990) - starring alongside French intellectual hottie Michel Piccoli.
Story is about a Jewish doctor who marries his Sudeten-German housekeeper in early 1930's Prague - and how that conflicts with their families and is doomed after the Nazis occupy Czechoslowakia.

Marianne Sägebrecht is in her mid-70's by now, but still active and well, and can be found regularly on German television.
Last edited: Jan 29, 2019
W

Clonenumber47 said:
"Feed" - 2005
This is what happens when feedism meets horror. Michael Carter, a demented serial killer, seduces plus sized women and literally feeds them to death. Detective Phillip Jackson investigates a missing person's case, leading him into the world of feedism. In his investigation, he finds Michael Carter, and his current growing victim, Deidre.
https://www.imdb.com/title/tt0445965/?ref_=fn_al_tt_2
https://en.wikipedia.org/wiki/Feed_(2005_film)

There are a couple of bbws in the film. However, Deidre the bed-ridden ssbbw, is played by Gabby Millgate in a body suit.
https://www.imdb.com/name/nm0589613/?ref_=tt_cl_t3
https://en.wikipedia.org/wiki/Gabby_Millgate 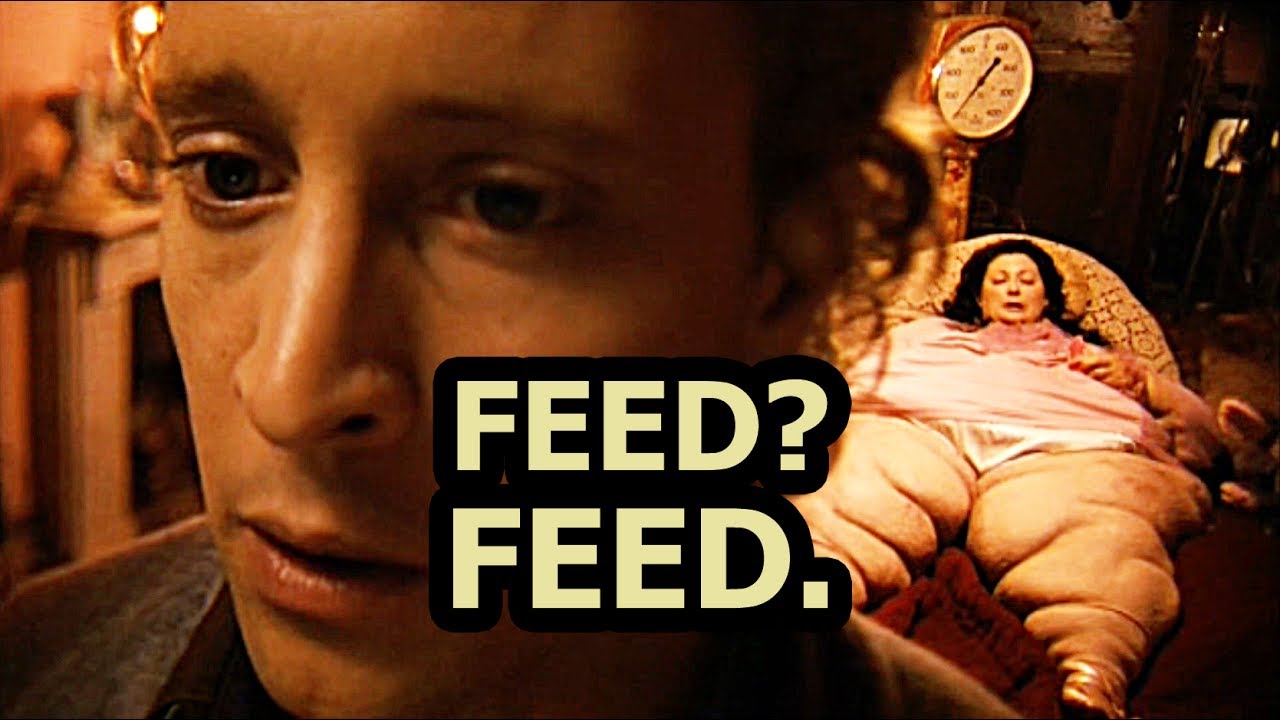 Thanks clonenumber47. As i was going through the list I was thinking of Feed.

Although a video game, I felt it related enough to post it onto this thread

"Dragon's Lair II" - 1991
Princess Daphne is kidnapped by an evil wizard, Mordroc, and Dirk the Daring must venture forth to rescue her again.

In stage 4, Dirk purses Mordroc through the garden of Eden, dodging a number of obstacles, and Eve, a SSBBW who is quite smitten with Dirk... 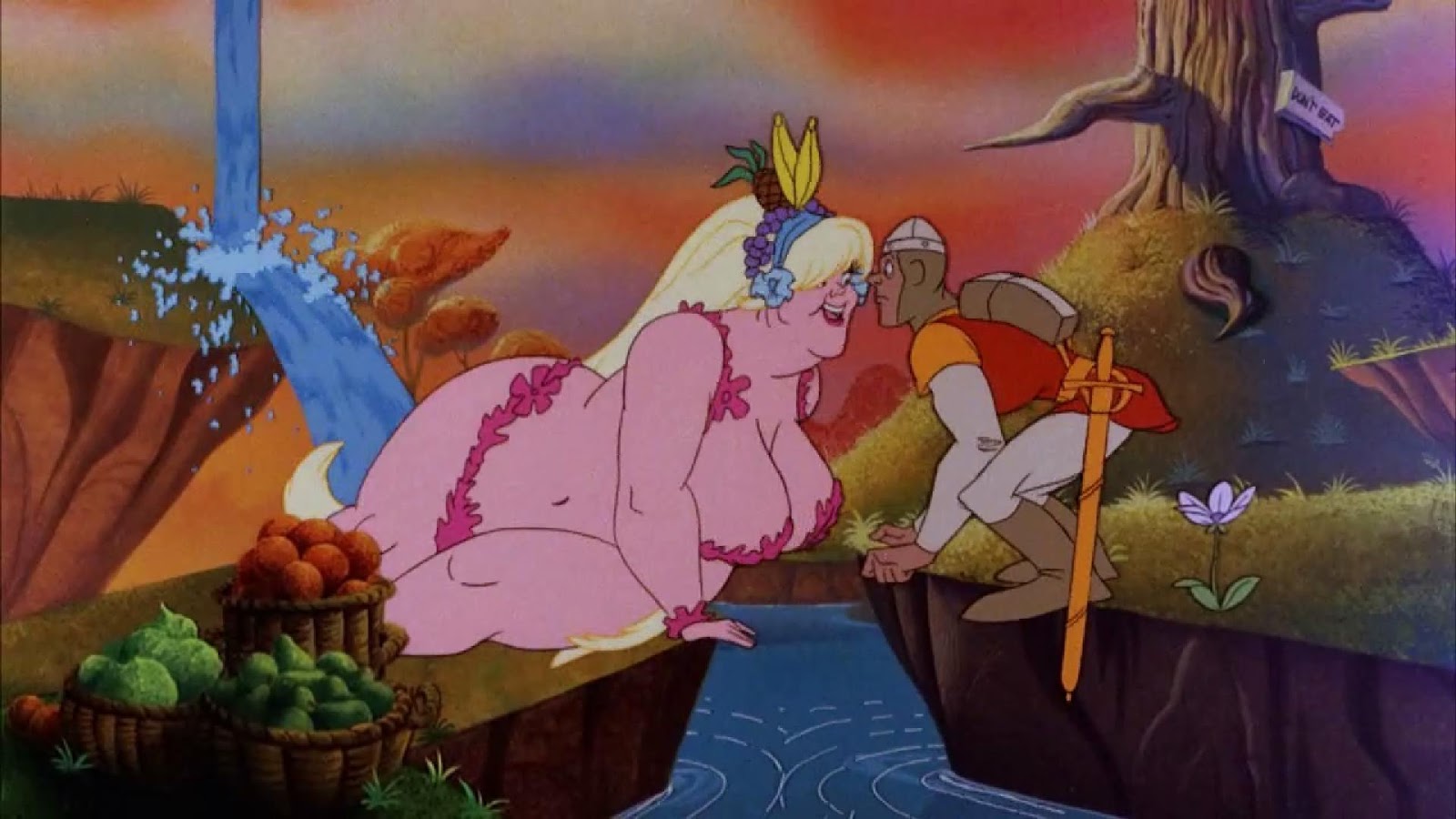 I am a big fan of horror. Lately I've been going back and watching Italian horror. The Argento brothers tend to use a lot of large women in sexy roles in their movies. It is a small part but usually plays a significant one for that scene. Has anyone else noticed this?

I'm watching "Santa Sangre" and there is a scene where the main character is given to a fat prostitute about 45 minutes in. The movie is co-written by Claudio Argento.

The movie ‘Casanova’ has a fun subplot with Oliver Platt.