What are you nerds reading these days?

Beyond Words: What Animals Think and Feel, by Carl Safina.

Hidden Figures. The nonfiction history the movie was based on. (Has nothing to do with my crush on Octavia Spencer!)

Wow I have found this old thread! Let's infuse new life to it!

This week, my choice is The New Gods. A compilation volume composed of issues #1 to #11 of the series of the same name originally published in 1971.

I'm currently on a huge Martha Wells kick. Working my way through her absolutely "Murderbot Diaries" (science fiction, with the most intensely human and relatable security android you'll ever meet), and while waiting my turn at them from the library reading through her Raksura series (fantasy, I guess? But on a very different axis from most fantasy, it has more of a science fiction vibe to it, more races of people than I can even remember, and again just wonderful characters). Very definitely 'feel good' reads.

Cover A. Art by Zach Howard and color by Leonard O'Grady.

Returning from a successful medical mission to a federation observation outpost on Te Awamutu VII, Captain Terrell and his first officer, Commander Pavel Chekov make their way back to the USS Reliant.

Terrell, Chekov, Dr. Wilder and Officers Bates and Skiles must face great danger after their shuttlecraft crash-landed on a M class planet occupied by the Gorn.

A race of cold-blooded reptilians, the Gorn still have hard feelings at the Federation fifteen years after their first encounter with Captain James T. Kirk in the TOS episode, "Arena."
C

I do need to step on my reading

Radium Girls. It's based on all the women who worked with radium and got sick and nobody knew what it was at first. ❤ 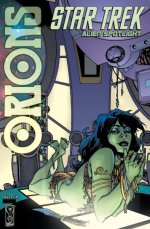 Cover A art by Zach Howard 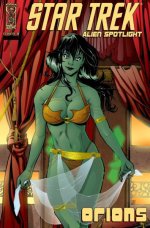 Cover B art by Elena Casagrande

(Fourth in a series of one shots)

Note: My reviews for this series is not a chronological order. It's mostly based on my personal interest. And also, my focus will be on the Original Series and the Animated Series' era.

As one of his first missions as a recently promoted Starfleet Captain, Christopher Pike must attend a Federation Conference on Babel as a guest of honor.

In there, Captain Pike must have to interviene in an attempt to assassinate Muso, a high profile Tellarite business liaison with an obscure background from Leata, an Orion slave girl.

While serving as a bodyguard to Muso, he discovers the relationship between this two characters' past while facing a lot of danger.

Colleen Hoover’s It Ends With Us. I do not get the hype surrounding Hoover’s books. She doesn’t just paint a picture using angst, she pours the bucket full over the canvas. I usually enjoy a good heavily emotional story, and yet, I still didn’t find myself being drawn in. This is the third Hoover book I’ve tried to read and ended up putting it in my DNF folder.

I know some are saying Stephen King has lost his touch, but I disagree. Just finished Fairy Tale by King and I strongly recommend this one. It wasn’t what I expected, but that’s a positive. Loved this book.

I'm finally reading Neil Gaiman's door stopper of a book American Gods. So far I'm enjoying it, other than being tired from staying awake too late reading it in bed each night.

What languages do you speak?
2

Got fat shamed by my dad. (And random vent)