When did you realize what you liked, and what triggered it?

I college, I was in a FWB/who-knows-what-it-was with a bodybuilder FA.

But I noticed I was far more attracted to him when he would start bulking. Being cuddly was far more comfortable, his relaxed diet was way more fun for the both of us, and it was intriguing to watch him gain weight but still maintain that muscle mass. Unfortunately, he would stop at a certain point and begin cutting which is when my attraction would begin to fade.

That's pretty much when I narrowed down my own preferences and basically did a 180 on what I thought my type was. And to some degree, I'm still figuring it out.
F

I'm like 90% it started with this channel called 'Steelmetal', all the way back in the early days of YT (I doubt it exists anymore). The person took pictures of pregnant woman or manipulated pictures of women to give them big bellies, then gave them captions of just what the women were saying or what the situation was.

If memory serves, the picture that REALLY got me started was a two-parter, with part one having her asking her husband for a beer. In part two, she had a bloated belly, and said something like "Ugh, one more beer and this bikini won't fit me." And something about imagining that scenario in my head just excited me. And from there, it continued, and the fetish was solidified.

Now I'm into fat, pregnant, and inflated women, partially because of some crappy photo manipulations I saw back when I was like 7.

When I was young we watched a show called Gimme a Break. I remember watching Nell Carter and imagining what her butt felt like. About the same time I had a teacher that would lean over my shoulder and I could feel her soft round belly on my shoulder. After those two, I was hooked. That was 4th grade

I believe I realized it when I saw the Guiness Book of World Records in the library in school in about 2nd or 3rd grade (must have been in the mid-90s). A picture of the "heaviest model" was in the book that year, weighing in at about 750lbs., if my memory serves me. At first I was critical, maybe even shocked, as I'd never seen such a big woman posting like a model in a bikini. But I couldn't stop thinking about her! I'll have to go back and find out who this gorgeous woman was.

Shit--just realized this is the BHM/FFA forum. Sorry friends, I'll take it down if it bothers anybody! Just ignore the FA who wandered in here!
Last edited: Jun 24, 2020

Broseph: no worries. So many people just look at the 'new posts' without seeing the board that the post is on that this thread hasn't been BHM/FFA specific for a loooonng time.

Tad said:
Broseph: no worries. So many people just look at the 'new posts' without seeing the board that the post is on that this thread hasn't been BHM/FFA specific for a loooonng time.
Click to expand...

When I was a child I had a secret sketchbook where I drew weight gain comics. Funny enough, the characters were animals, mostly chicken... Don't ask me why! One time my mother had a look at one of these drawings. There was a really realistic situation : a chicken getting fat because of two candy. The drawing was infinitely naive but the idea was easy to get. What would my mother say? Would she find me even weirder as I already was? I was paralyzed. She just said sth like "mh okay...". Sadly, at a very young age I knew being attracted to bigger folks was socially inappropriate.

When I was a teenager I was really turn on by the episode of the Totally Spice where Clover couldn't help eating and got fat. It was gold.

I'm not sure if it was a trigger, or my preference was always there, but I was at a party (with my ex-husband) and a strange man whom I'd just met gave me a HUGE hug. He was over 6ft and he was solidly built, with a hard ball belly. I was overwhelmingly aware of where that belly pressed during that hug. I've never forgotten it.

littlefairywren said:
I'm not sure if it was a trigger, or my preference was always there, but I was at a party (with my ex-husband) and a strange man whom I'd just met gave me a HUGE hug. He was over 6ft and he was solidly built, with a hard ball belly. I was overwhelmingly aware of where that belly pressed during that hug. I've never forgotten it.
Click to expand...

I have to agree that a big ball belly pressing into you is a delicious feeling.
L

squeezablysoft said:
One of my earliest related memories involves reading a book too, for me it was about a boy named Sprout with an impressive appetite
Click to expand...

I feel like I remember this book too. Do you remember what it was called?
V

I realize that I was into plus size women at the age of 12. There was a lifeguard at a pool that I went to. I did not know plus size women could be lifeguards. I had a huge crush on her. My friends teased me when I told them.
L

When I met my GF and later wife, she was just chubby. I wasn’t into bigger girls and I had rejected her before because I thought she was too big for me. But eventually, we started dating. Weight was never a topic until she gained weight rapidly. About three to four months into our relationship, she complained about her belly blubber and she thought I was going to leave her if she got even fatter. I told her that I loved her including her cute belly. About 2 months later, she had a double belly that bulged nicely when we sat in the bathtub. I was absolutely thrilled by it and her initial weight gain of 20 kg in effectively 3-4 months amazes me to this day. The sight and feel of her double belly was my defining moment in my fat admirer journey.
W

I apologize if I have told this story before. I don't like to repeat, but I think that this fits this thread.

I was in the Army and going through specialized training. We usually had the weekend off and could go wherever we wanted. A friend/room mate lived in a small town just a couple of hours away.
His family came to pick us up for the ride to their town.
That weekend was the homecoming football game and dance for the high-school he graduated from the previous year. Since I didn't have the money for a tux I wore my Army dress greens. So I wouldn't feel strange being the only one wearing a uniform, my friend wore his too. Since we had only been in less than 6 months the uniforms were fairly bland, but we were a BIG hit.
Neither of us were left alone for long and were constantly being pulled onto the dance floor.
About halfway through the night, a very short, pretty, plus sized girl came up to me at the drink line. She said "Thank you for your service ". I replied with a smile, "Yes ma'am, thank you for your support ".
Then looking down at her shoes she asked "I uhhh, don't suppose that you would want to dance with me". Then walked away.
I left the line, went after her, and tapped her on the shoulder. She turned around and was surprised to see me. "Where are you going?" Then, after a pause, "Yes I would like to dance with you ". You can just imagine the delight on her face!
She and I danced several songs before other girls wanted to cut in. I rejected all of them and spent the rest of the dance with this lovely lady.
My friend and I spent almost every weekend for the next 2 months in his hometown and I saw her every time.
Both of us were 18 so we were legal. Unfortunately, all we were able to do without a car to go somewhere, was kissing and serious making out.
We also lost touch. So sad.
She was the very first time that I was attracted to and desired a plus sized woman.
That was some 35 years ago and I still think very fondly of my Pennsylvania gal.
Last edited: Apr 5, 2021

My first boyfriend ever was a big, soft teddy bear with an amazing belly. I used to bring him snacks because I worked at a little convenient store during high school. I loved watching him enjoy what I brought him and then cuddling up to him afterwards. A nice big sexy man makes me feel beautiful and safe. I hope I find one someday

TheShannan said:
My first boyfriend ever was a big, soft teddy bear with an amazing belly. I used to bring him snacks because I worked at a little convenient store during high school. I loved watching him enjoy what I brought him and then cuddling up to him afterwards. A nice big sexy man makes me feel beautiful and safe. I hope I find one someday

You're singing my song!
H

I have always been attracted to bigger girls even in like 2nd grade. It is funny and sad for my two older brothers who never dated or married someone over a size 6 woman.

My aunt who loved to cook and eat was the first adult who I loved to watch her when she cooked. Everything swayed under her house dress as she whipped up food in her cooking bowls. She taught me how to decorate cakes.

Always; watching Winnie the Pooh and reading The Hardy Boys with story emphasis on Chet!

i only figured out it was weird or different when The Lord of the Rings came out and every girl in my school gushed over Aragorn and Legolas while I fantasized exclusively about cuddling with Sam.

i only figured out it was weird or different when The Lord of the Rings came out and every girl in my school gushed over Aragorn and Legolas while I fantasized exclusively about cuddling with Sam.
Click to expand...

I loved the hobbits. But that was a little later for them to make me first realize what I liked.
B

RVGleason said:
The Warner’s Cartoon ‘Pigs is Pigs’ did it for me. 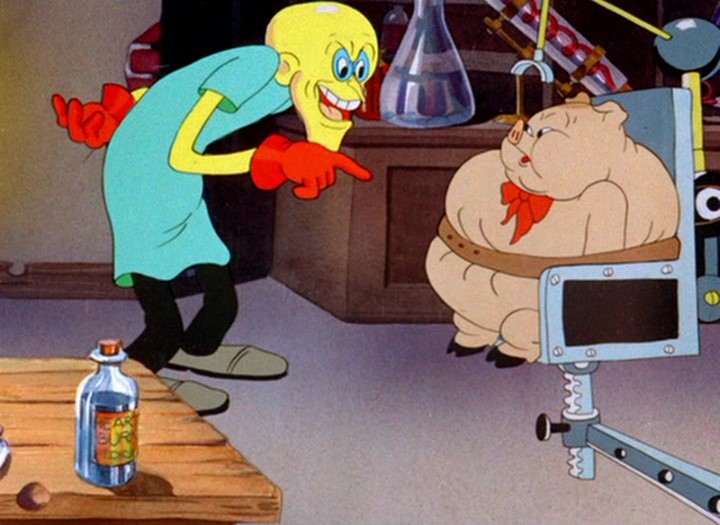 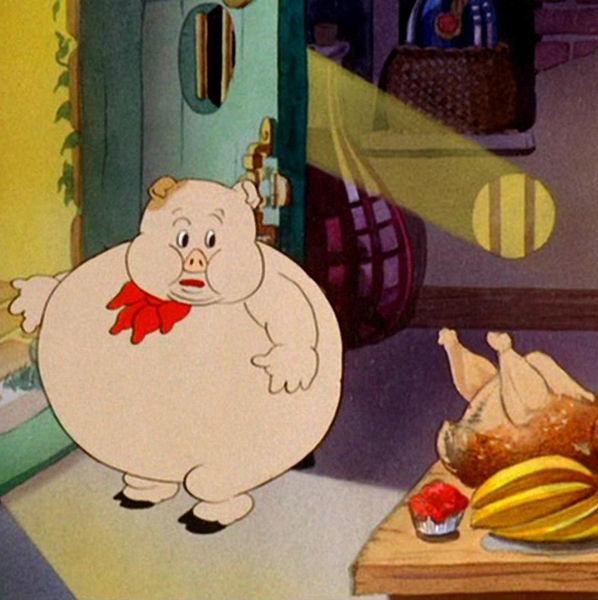 I definitely fall into the "always knew it" camp. Like you all, various cartoons as a kid had episodes I really liked, but the one memory that stands out is this.

As a kid one of my favorite books was Tale of Desperaux , which is in general a great kids book. But there was a girl in that book who was very fat, and they had a few sketches of her throughout. I loved to look at those sketches. I didn't think much of it because after all there were plenty of other pictures I loved to look at constantly (spanning from various normal topics like baseball or science) but readinng this thread brought me back to that.